William Eaton and the Soldiers’ and Sailors’ Monument 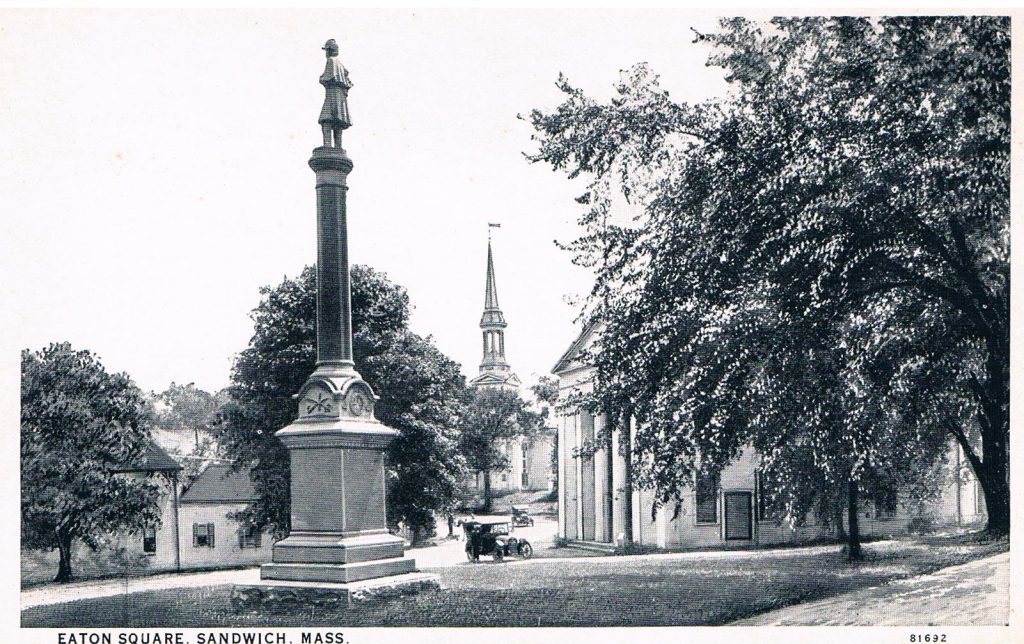 Over 100 years ago, the town of Sandwich celebrated a very special Memorial Day. On May 30, 1911 William Eaton, a wealthy business man from Brockton, donated a 30 foot Civil War Monument to the people of Sandwich. It was erected next to the Town Hall on a piece of greenery that became known as Eaton Square. The Soldiers’ and Sailors’ Monument is still there today for all to see. 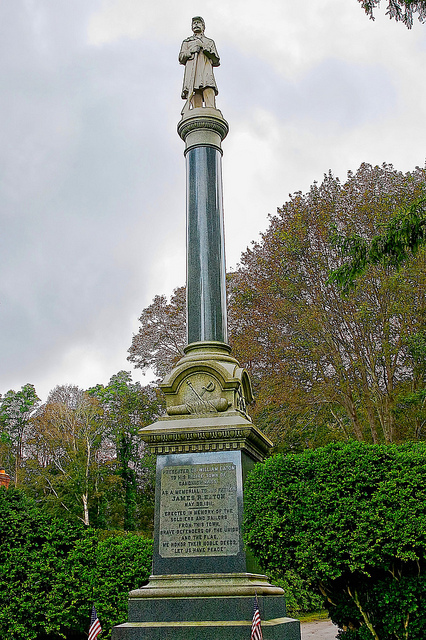 The dedication took place on a rainy day, but that did not dampen the spirit of the throngs of townspeople and visitors who turned out for the festivities. There was a parade lead by the band from the Keith Car & Mfg. Company and, the full crew of the USRC Gresham, Civil War veterans from the GAR, school children and a host of town officials. There was even a recital of Lincoln’s Address at Gettysburg. Patriotic speeches were given including one by the keynote speaker, John F. (Honey Fitz) Fitzgerald, the Mayor of Boston and the grandfather of President John F. Kennedy. Mayor Fitzgerald spoke of the custom of various nations honoring their great generals, but said the United States was the one nation to recognize the common soldier in granite. 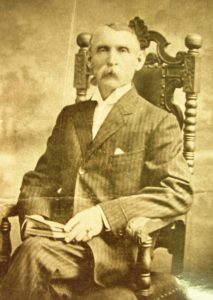 William Eaton, the donor, was not always a rich man. During his youth he was desperately poor. His English father, James, was a glass worker at the Boston and Sandwich Glass Co. (B&S), but he died in 1856 when William was only 8. There were no government social services in mid 19th century America and young William had no alternative but to go to work at the glass factory. In his short autobiography he describes the situation:

After my father’s death I went to work in the Boston and Sandwich Glass Works, where they worked night and day, beginning at one o’clock a.m., Monday. After I worked in the factory some time Mr. Fessenden, the superintendent of the factory, became interested in my case. He sent me to board with a family by the name of Reighel. He paid my board every two weeks to them out of what I earned in the factory; he also gave me what I needed to get shoes and clothes. I tried to be careful of them and tried to make them last as long as possible as I feared I might not be able to pay my way, my wages being very small. After paying for these things, what little was left was saved for me, but this sum was very small.

He was a tireless worker and by the time he was 14 he had saved enough to buy some furniture, hire a house and make a home for his Irish mother Mary and his 2 brothers. At the factory he was fortunate to meet a good friend of his father, John F. Clayton, who was the steam engineer at the factory. Billy Eaton was interested in all things mechanical and Mr. Clayton took him under his wing, spoke words of encouragement to him and answered the hundreds of questions he put to him. Whenever he had “spare time”, he was in the engine room learning all he could from his mentor. He was a quick learner, had a natural
ability in this field; and eventually he became the assistant engineer to Mr. Clayton.

Years later, Mr. Clayton asked the B&S for a raise, but the company refused the request and Clayton resigned. The company asked Eaton to show the new engineer around the factory and to make him familiar with the operations. In an amazing show of loyalty, Eaton said he would not do so and he resigned as well. The company found Mr. Clayton too valuable to lose and he was soon hired back and his demands were satisfied. William returned as well and stayed as Mr. Clayton’s assistant until the company closed in 1888. After Mr. Clayton died, William carried flowers to the grave of his friend at least twice per
year and did so for the rest of his life.

William Eaton moved on to other parts of the country and improved his career as an engineer. Eventually he made his way back to Brockton where he invested money in real estate and accumulated some wealth. During his retirement years he took the time to visit different places in the US. One of these journeys took him to Gettysburg where he was emotionally overcome with the sacrifices that so many young men made in defending the Union. He remembered his boyhood years in Sandwich and recalled the young lads from
the glass factory who answered Lincoln’s call for volunteers. It was this experience which motivated him to donate the monument and its inscription reads:

Presented by William Eaton
to his Native Town of
Sandwich, Mass.
As a Memorial to his Father
James R. Eaton
May 30, 1911

Erected in memory of the
Soldiers and Sailors
From This Town
Brave Defenders of the Union
and the Flag
We Honor Their Noble Deeds.
“Let Us Have Peace”

When the Memorial Day festivities took place in Sandwich on May 30, 1911, they were exclusively directed to those who had given their lives during the Civil War. Its tradition was begun by General Logan in 1868 when he had his troops place flowers on the graves of Union and Confederate soldiers buried in Arlington National Cemetery. The practice quickly spread among the northern states and May 30 was initially known as Decoration Day. The southern states did not participate in May 30 observances, choosing instead to honor Southern dead on separate days. It wasn’t until the end of World War I that Memorial Day changed from honoring those who died in the Civil War to honoring all Americans who died in any war. 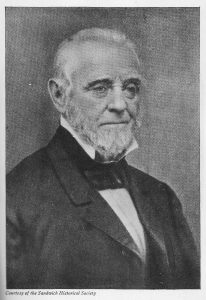 During the years from 1861 to 1865, 386 men from Sandwich enlisted in military service. Approximately 100 of these were glass factory workers. Patriotic fervor was running high and Deming Jarves, the head of the glass factory, suspended the rents of any factory worker who enlisted in the war. Volunteers reduced the number of workers in the factory and glass production decreased. It would take years to rebuild the manpower at the factory. By the war’s end, 54 Sandwich men had died on the battlefields or from wounds or diseases. For a small town of 4,500 people, this represented a tremendous sacrifice. It was within this atmosphere that William Eaton spent his early teenage years at the glass factory in Sandwich and as head of his family household.

Martha Hassell, former Curator at the Sandwich Glass Museum, captured the meaning of Eaton’s monument in an article she wrote in 1981. “Although it was particularly those men [enlistees] whom Eaton was honoring in erecting his monument, he was also remembering all the workers of the Boston & Sandwich Glass Factory who had played such an important role in his life. Therefore it seems appropriate that the monument should be placed not only near the town but also facing the Sandwich Glass Museum where so many beautiful
pieces of Sandwich glass are on display.” 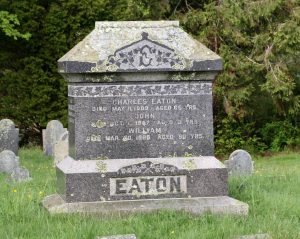 It should be said that without Eaton, there would be no Civil War Memorial in Sandwich for town records show that a committee was formed in 1867 to explore the proper way to honor the Civil War dead, but the town ultimately voted to postpone the enterprise and nothing was ever done until William Eaton donated his monument in 1911. He never married and died in Brockton in 1928 at age 80. He is buried in the town where he was born in the Old Town Cemetery on Grove Street and his grave is distinguished by a large Eaton granite stone bearing not only his own name but lovingly those of his parents and brothers and sisters as well. He also honored his first cousin, Joseph Eaton, a glass worker who served in the 36th Massachusetts Regiment during the Civil War. At the Mt. Hope Cemetery on Route 6A, a large granite boulder bearing the name Eaton was placed beside the simple headstone of the Civil War veteran.

Eaton had done well in life, but he always felt badly about his own lack of formal education. He had said, “I could have gone farther in life if only I had had some mathematical training.” In his later years he placed $10,000 in a scholarship trust to be used for worthy Sandwich students. He did not name the scholarship after himself, but after the man who had provided him with the education he needed. The John C. Clayton Scholarship has been awarded to deserving Sandwich High School seniors for nearly 80 years and the practice continues to this day.

Finally, William Eaton never forgot how difficult it was to be poor. In his will he set aside $5,000 in trust known as the Mary, Charles and John R. Eaton Memorial Fund in honor of his mother and brothers. It calls for the fund “to provide needy and worthy families in the town with Christmas dinners and other comforts during the Christmas season” It is still in existence today. He was a humble man of quiet dignity who did the best he could. He loved his country, his family and his native town of Sandwich. Mr. Eaton concluded his own short biography with these words. “I have been industrious and it has been a source of great happiness. I have been temperate in my habits and believe in the simple life, which I have followed to a great extent. I have been able to accomplish some things beyond my expectations. I have made the most of the talents God gave me.’ 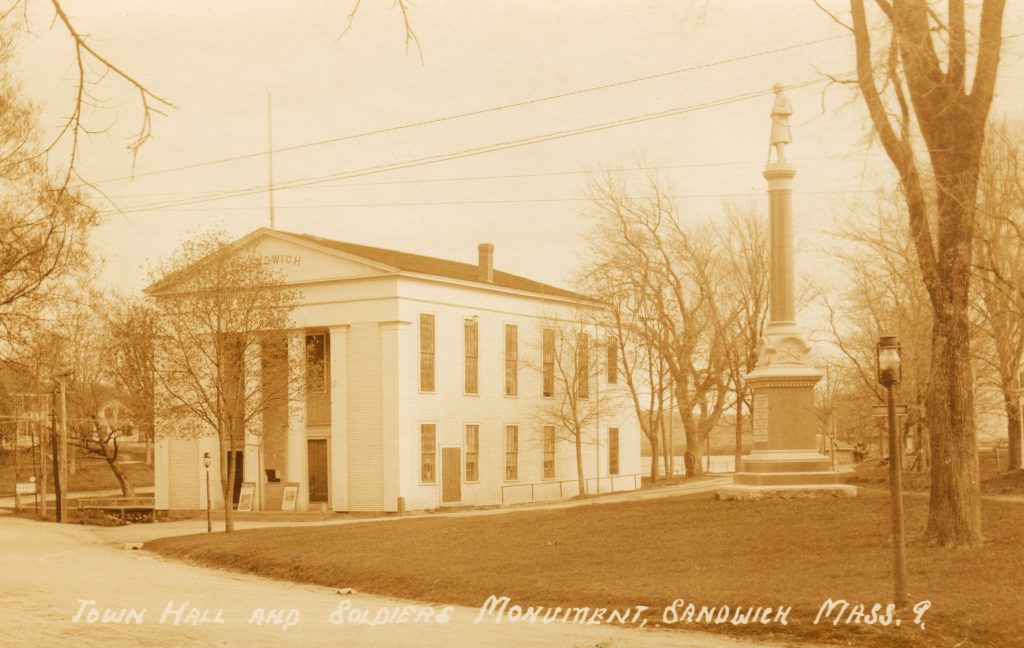 This entry was posted in Articles, Civil War, History of Sandwich. Bookmark the permalink.