A Brickyard at Town Neck

In the area known as Town Neck, along the shore of Cape Cod Bay, a lens of fine clay suitable for brick-making was discovered, perhaps as early as 1790 when construction of houses and mills picked up in earnest. 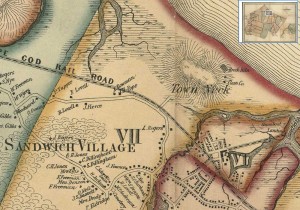 1857 Map by Henry F. Walling (Click for Larger View)Map Reproduction Courtesy of the Norman B. Leventhal Map Center at the Boston Public Library.

Russell Lovell, in Sandwich, A Cape Cod Town (p. 258), states there is a reference to a brick kiln at Town Neck in connection with the bombardment of this coast in 1812 by the British. “The British kept a watchful eye on the brickyard at Town Neck in Sandwich,” according to town archivist Barbara Gill. “For some reason they thought it was a hotbed of sorts.” In a letter to the Cape Cod Times dated 11/22/1937, George Burbank of the Sandwich Historical Society wrote, “During the War of 1812, the English frigate, Commodore Harty, of 74 guns, observed the brick kiln on Town Neck, took it for a fort of undetermined strength and dared not come nearer than five miles from shore.” (Read more: EDITORIAL: War on our doorsteps 200 years ago – – The Bourne Courier )

In 1815 a brick house was built at 100 Tupper Road and to this day is the only brick house in Sandwich. It is said to have been built by Simeon Leonard, then the owner of the Town Neck brickyard.

Lovell writes: “In 1819 the town appointed an officer whose title was ‘Surveyor of Brick.'” Although there was only one brick house, the yard provided foundation materials for many Federal period buildings throughout the town.

The first deed referring to the brick kiln so far known is dated 1828 when the owners were David Benson and Simeon Leonard. The property was two acres bounded by the shore to the east, private land at the marsh, and by the proprietors’ lands.

The next owner of the brickyard was Cyrus Smith who, in 1829, sold it to Deming Jarves, founder of the the Boston and Sandwich Glass Company (located in “Jarvesville”). Jarves used the Town Neck yard to produce brick for the numerous factory buildings located just across the marsh from the kiln. According to Lovell (p. 331), there was a narrow but solid bridge running from Town Neck across the marsh to Jarvesville near State Street. “This bridge was especially for use of a narrow one-horse wagon which brought bricks from the kiln over to Jarvesville.”

Deming Jarves was the main principal of the glass company until 1858, when he resigned over a dispute with its Board of Directors. Deming and his son, John, began another glass company just down the street called the Cape Cod Glass Works. At least 500,000 bricks needed to construct the buildings and chimneys of this new factory mere made at the Town Neck yard.

When the “Pot Room” of the Boston and Sandwich Glass Factory was torn down in 1937, its bricks were used as facing for a new building being constructed on Main Street in Hyannis for the Cape Cod Standard Times (today’s Cape Cod Times).

Other Brickyards on Cape Cod

In the Sandwich Town Archives is a copy of the deed for Jarves’ purchase of the Brick Yard, dated October 3, 1829:

“I, Cyrus Smith of Sandwich in the County of Barnstable, State Massachusetts in consideration of seventy dollars paid by Deming Jarves of Boston in the County of Suffolk the receipt whereof I do hereby acknowledge, do hereby give, grant, sell and convey unto the said Deming Jarves an undivided half of a certain piece of land own’d in common with said Jarves & is bounded as follows. North by the Sea shore, East by the lands of John Dillingham and the heirs of John Dillingham deceased, South & West by Town Neck so call’d and is known by the name of the Brick Yard & is so occupied, containing two acres more or less and is the lot which I purchased jointly with said Jarves, one half of David Benson Oct. 6, 1828 & is recorded in Barnstable records Oct. 7, 1828, 3o Book folio 123, the other half of Wm Fessenden Dec 8, 1828 & is recorded July 15, 1829. 2o Book folio 121 — the said lot to be held subject to the order of the Attorney appointed by said Smith agreeable to an indenture made and executed the 3 day, October 1829. …

In Witness Whereof, I the said Cyrus Smith and Lucy, wife of said Cyrus in relinquishment of her right of Dower have hereunto set Hand & Seal on this ninth day of October in the year of our LORD, One thousand eight hundred and twenty nine.”

This entry was posted in Archaeology, Articles, History of Sandwich. Bookmark the permalink.