The Sandwich Boardwalk (sometimes called the “Plank Walk” or the “Mill Creek Foot Bridge”) is about 1300 feet in length and crosses Mill Creek and the marsh, leading to the Town Beach on Cape Cod Bay. Originally constructed in 1875 by Gustavus Howland (1822 – 1905), son of Ellis Howland who built Town Hall, it has been rebuilt carefully following the original design several times. It is listed in the Massachusetts Cultural Resources Information System (MACRIS) under Inventory Number SDW.905. Read the full report HERE.

Naturalist Thornton W. Burgess and historian Russel Lovell have written about the historic and iconic Boardwalk. Click HERE to read.

A few fish shacks remained on the marsh near the Boardwalk until about 1950. In a personal interview in 1979 Lombard Jones recalled that one shack was owned by Eugene Haines; another by relative Isaiah (Ike) T. Jones. The Jones shack was originally a beach rescue shack and was moved from its location near the mouth of the Old Harbor. Jones used it to hold dories. Jack Mahoney, who lived in a boat cabin on the beach near the Boardwalk, died of carbon monoxide poisoning about 1920.

In 1941 Allan S. Beale was the owner of record of the Jones boathouse “on the edge of Dock Creek, adjacent to the Boardwalk.” Beale was the resident engineer for the construction of the Sagamore and Bourne bridges.

There are a few references in the Town Archives to an earlier boardwalk (or “footbridge”) constructed in 1835 over Mill Creek from Acorn Wharf (built by the Glass Factory) to the beach. “Townspeople would wade out during low tide in search of lobsters.” B. Haines sketched a picture of it. In 1862 William Denson fell through a hole in this foot bridge and drowned. On Dec. 21, 1874 a heavy northerly gale caused the sea to break through “near the foot bridge, a little west of the entrance to the harbor.”

From “Lapse of Years:” “July 3, 1875: The new road to the beach was opened to the public on this date, also the footpath across the marsh.” The new Boardwalk was built by Gustavus Howland for $500.

In a personal interview on Dec. 2, 1982 Bert French (who stayed at a shack owned by Frank Reddys) recalled: “there was a plank bridge from State Street over to the Neck, wide enough for a narrow wagon and one horse. This was the way bricks were brought to the glass factory. There was a 2-story bathhouse with veranda all around it at left of the Boardwalk on the dunes. Destroyed in 1898 storm.”

Sandwich Observer, May 2, 1899: “Mr. John Percival has the contract to build the new footbridge to the Beach. There is a rumor that the town is to erect an iron bridge in place of the wooden one that washed away in the November gale. A very good idea…as it is a long distance to travel on foot around Town Neck road.”

The iron bridge was never built but the wooden walkway was rebuilt many times over the years and in 1991 was virtually destroyed by Hurricane Bob. Supporters rebuilt the Boardwalk by selling over 1700 planks to local businesses and residents personalized with engraved messages. Work was completed in June, 1992.

The Boardwalk was again partially destroyed by a blizzard in February of 2013.

The current parking lot was constructed on land known as “Tobey Island” and is slightly higher than the surrounding marsh. The Boardwalk remains one of Sandwich’s unique treasures, offering scenic views from the Cape Cod Canal to Scorton Creek. It was recently chosen by National Geographic as one of the Top 10 boardwalks in the United States. 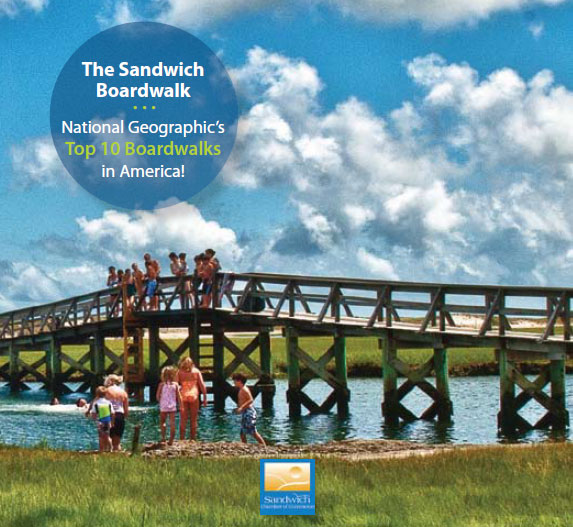 8 thoughts on “History of the Boardwalk”