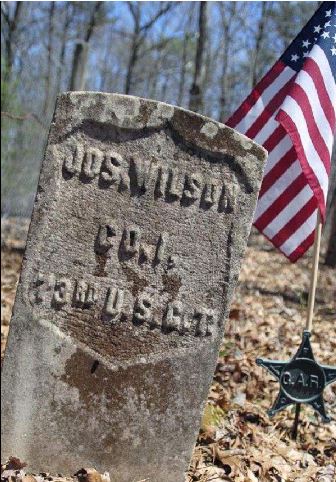 There is a little-known gravesite of a black civil War soldier, Joseph Wilson, who is buried in Sandwich in a wooded area off of Quaker Meeting House Road near the Stop & Shop. In 2012, Eagle Scout Alex Moore of Sandwich, took on the project of restoring the neglected burial site. He cleared away years of invasive trees, unwanted growth and rotting leaves; created a new path to the burial area and replaced the decrepit fence surrounding the grave and replaced it with new fencing. He also cleared path to what must have been the small house and barn of Joseph Wilson.

This short paper is an attempt to correct the Sandwich archival records and bring clarity to the situation. Several newspaper articles have been written about him over the years and they too contained some erroneous information. 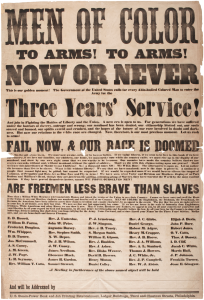 Joseph Wilson’s military records show that he was “mustered in” on September 27, 1862 when he enlisted in New Orleans as a private in Company I of the 1st Louisiana Regiment as an infantryman. His 1862 enlistment papers record him as age 19; therefore, his birth year was 1843. The unit was also referred to as the Native Guards, Free Colored*. Curiously, the 1st Louisiana Native Guard was originally formed in 1861 by the secessionist Governor as a militia for the Confederate States of America. It was comprised of free persons of color. It was disbanded within a year after New Orleans fell to Admiral Farragut and the city was occupied by General Butler.
* the muster in document contains the asterisk note, “subsequently became Company I, 73rd Regiment US Colored Infantry.”

The 1st Louisiana Native Guard was one of the first all-black regiments to fight in the Union Army during the American Civil War. It was based in New Orleans and played a prominent role in the siege of Port Hudson, LA. Its members were comprised of a minority of free men of color from New Orleans but, most were African-American former slaves who escaped to join the Union cause and gain freedom.

In May, 1863 the name of the unit was changed to Company I, 1st Regiment, Corp d’ Afrique. The new name made use of Louisiana’s French origins and clearly references it as a unit with black roots. By May, 1864 it was renamed again with its final designation, Company I, 73rd Louisiana Regiment, US Colored Infantry. 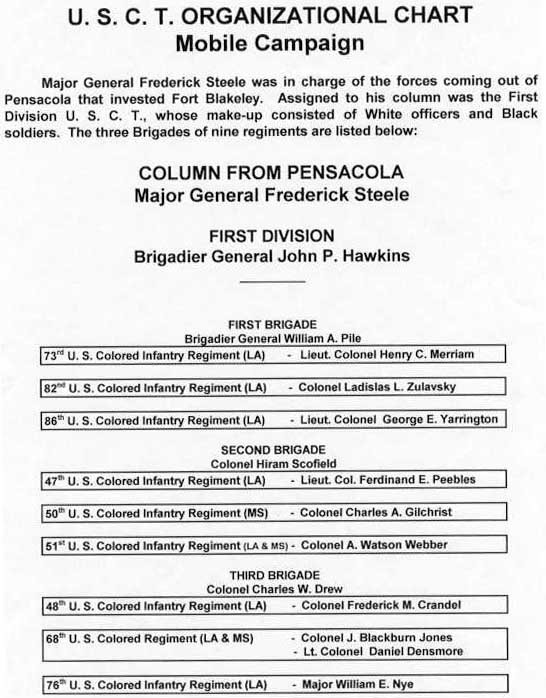 Nothing is known as to how, when and why Joseph came to Sandwich. We do know the following from the Sandwich Vital Records, p.1033:
October 22, 1874 – Joseph Wilson, 28, [according to his enlistment papers he should be age 31] of Sandwich, laborer,1st marriage, born Maryland, son of Joseph and Mary married Caroline Phillips of Mashpee, 35, born Nova Scotia, 2nd marriage. Marriage performed by Rev. S A Blake.

The next record on file comes six years later from the Sandwich 1880 Census. Once again there is confusion and contradictions about the ages of both Joseph and Caroline as well as where Joseph was born. It records Joseph as age 40[correct age was probably 37] and lists him as “farm laborer”, born Virginia [ his marriage papers stated he was born in Maryland]. Carrie is recorded as age 50 [the correct age was probably 41 based on her marriage record] born Nova Scotia. She is listed as “keeping house” and they are recorded as blacks in South Sandwich.

The final record refers to Joseph Wilson’s death. Joseph died of consumption (tuberculosis)in Sandwich on May 3, 1886 which would have made him 43 according to his enlistment papers. However, the document of his death puts his age at 62! This age seems completely inaccurate because only 6 years earlier the 1880 Census records him as age 40 (probably was age 37 according to his enlistment papers).

Around the time of his death, Sandwich pauper records record a payment of $5 made to Alexander Booker for care rendered to Joseph. The town also paid $2.50 to F.A. Fisher for opening the grave of Joseph Wilson. His grave has a traditional Civil War headstone issued by the government and it is inscribed with his service in Company I, 73rd Regiment. There is no record as to how it was obtained; perhaps it was done by the local GAR. Carrie died in September 1891 which would have made her age 52 according to her marriage papers.

Local news articles in the archive file have understandably confused this Joseph Wilson with another Joseph Wilson shown in the book, “Massachusetts Soldiers, Sailors and Marines in the Civil War”. They are two different people and the Massachusetts Wilson served in the famous 54th Regiment. He became prominent after the war and I have provided documented evidence of his history in the file to show that there two Joseph Wilsons.

In summary, more than likely that Joseph Wilson was a former slave. That would account for his confusion as to whether he was born in the slave holding state of Maryland or Virginia; as a young slave it would not have held much relevance to him. It may also account for the confusion of his age. Perhaps he was later sold by a slave trader to a plantation owner in Louisiana. Otherwise, there is no logical explanation as to why a free black man would make his way through the slave states of the South around the time of the Civil War in order to arrive in the slave holding state of Louisiana. Moreover, he enlisted in colored 73rd Louisiana Regiment which was primarily made up of freed slaves. All of this makes it very likely that he was born into slavery and only escaped it when the Union forces invaded and captured New Orleans.

In Sandwich, he lived in a small farm in South Sandwich near what is now called Quaker Meeting House Road. He is buried on what was his farm site. As a farmer, he must have cleared the land but, after 130 years the property is completely wooded and it is now owned by the town of Sandwich.

He must have been very poor and it is likely that he practiced subsistence farming to live. The pauper records prove that he had little or no cash on hand. His early death at age 43 is further proof of the hardships of his life.

Joseph Wilson is the only know black Civil War veteran buried in Sandwich.