Some people would look at the Henry T. Wing School and see an aging, cobbled-together building with serious (read “expensive”) structural and electrical problems.

Others would look at the same 104,000-square-foot building and see a structure that could meet a variety of town needs—including centralized town offices, cultural and artistic space, and senior housing—under the same if varied roof.

The latter viewpoint far outweighed the former at the Monday night, April 13, forum on repurposing the Water Street building, slated to close as a public school this year. More than 130 people attended.

Speaker after speaker saw the Wing school as a place of possibility and potential, with enough space to be divvied up among various community needs.

The oldest section of the Wing School, which initially educated all public school students in the town, dates from 1927. Additions were completed in 1958, 1963 and 1974.

The town still is several weeks away from dropping the other shoe: an estimate on the cost of upgrading Wing to current building codes and addressing serious problems at the structure.

Michael McKeon, principal partner-in-charge at Kaestle Boos Associates of Foxborough, the firm hired by the town to help conduct the feasibility study, listed a number of the more serious challenges at Wing, including the need to replace its roof, its heating, ventilation and air conditioning units, and its wiring.

At present, Mr. McKeon said, much of the building is not handicapped-accessible, and a serious renovation likely will trigger a need to bring the building up to fire protection code, including the installation of sprinklers.

Just to get rid of the hazardous materials in the structure probably would cost $1.5 million, he said.

The possible cost of renovating the building drew worried comments from a speaker at the meeting, who said she could not afford higher taxes. She questioned putting the renovation for Wing ahead of the town’s needs for better police and fire facilities.

But she was alone in her spoken concern over costs. And nearly all the other speakers at the forum chose to focus on the building’s potential rather than its drawbacks.

“This facility is huge,” said Cynthia Russell of Water Street, a member of the newly formed Sandwich Arts Alliance, which put on a full-court press with multiple speakers at Monday’s forum. “Arts could just be part of it.” 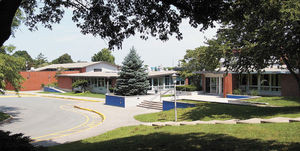 In a statement, the alliance said that Wing would make a great cultural and community center, a place where organizations could have meetings and events of all sizes.

A cultural center could draw more business to Sandwich and also qualify for grants to renovate the building and assist in its operation, alliance speakers said.

Speakers praised the building’s location within walking distance of the village and its ample parking.
Another idea: Wing also could accommodate up to 60 units of senior housing that could be built by a for-profit developer at no cost to the town, with plenty of room left over in the building for nonprofit uses.

Sandwich officials already see Wing as a space to pull together offices and functions now spread out around the town.

But one municipal function is almost certain not to be placed at Wing, even though speakers Monday suggested the possibility: that of public safety.

Speakers further saw Wing as a place to naturally encourage interaction between people of different generations.

A number of speakers urged that the re-use of Wing on a temporary basis start immediately following the closing of the school, pending structural repairs and renovations.

But Mr. McKeon said such initiatives—even holding art classes in former classrooms—would represent a re-use and would not be allowed under the building code.

Selectman R. Patrick Ellis, who is serving on the Wing study committee and who moderated Monday’s discussion, emphasized that no decisions have yet been made about the future of Wing.

Mr. Ellis said two more public forums will be held to discuss the future of the building.