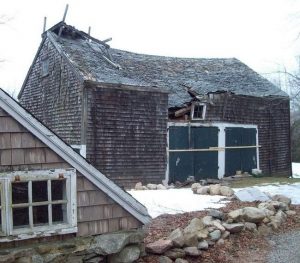 Paul Gately, March 19. 2014 2:24PM
This is the course being considered by the historic district committee as it deals with Kevin Hamlin’s request to demolish the centuries-old barn on his property at 45 Water St. across from the Wing School.
Committee Chairman Bill Collins said the so-called demo-request has prompted “considerable public interest” in the structure and lots of phone calls. One call came from Thomas Keyes, who is Hamlin’s neighbor across Water Street.
Keyes is willing to send a team of archaeologists to measure the Hamlin barn, which badly leaks through the deteriorating roof, and perform a survey.
“That’s not a bad idea at all,” Collins said. “Mr. Keyes would be interested in moving pieces of the barn to his own property and rebuild it there.”
Ian Ellison of Ellison Timberframes, meanwhile, has visited the Hamlin barn, which is situated in the Town Hall Historic District and remains a part of Sandwich history.
Ellison says the barn must come down given its deteriorating condition. But he would rather this happened in pieces instead of via the wrecking ball.
Ellison says the fate of barns is a continually developing topic across North America. He has also worked on palaces in France and remains a preservation enthusiast.
District committee member Betty Allen, meanwhile, cites a barn preservation/stewardship program and says there are considerable tax credits available to property owners who try to preserve – one way or another – their barns.
At this point, the Hamlin barn is private property so Community Preservation Act funds cannot be requested for preservation efforts. But if the Town of Sandwich stepped in and bought the structure, then the barn could be taken apart, with pieces stored in a secure and dry place until they could be used again. That path would allow for a CPA funding request, district committee members said last week.
Collins said the barn is in “a prominent location and deserves special attention. This is something on which, I think, we have to move slowly.”
Hamlin agrees, to a point. He agreed to a two-week review period before returning to the district committee. But, he said, the barn roof continues to leak and if dismantling piece-by-piece is to be pursued, the holes in the roof would have to be covered in the interim.
Parts of the barn that might be preserved include tie-in joints in the roof system; the windmill could be stored out of the weather; and both the wooden frame and some metalwork could be saved for later restoration or reproduction.
A small section of the roof joinery would likely prove invaluable to historians as an actual example of construction work from the 18th century; perhaps more so than photographs of the barn that would be placed in the Sandwich Town Archives.
“We need time to explore the alternatives to demolition,” Collins said. “To consider ways to save the historical aspects of the building and to determine if the barn can be secured until things are worked out.”
The district committee in the last year dealt with two other barn-demo-applications: one at 108 Main St. and another at 158 Main St. The structure at 108 Main St. was demolished but the property owner agreed to replace it with a garage with so-called “Streetscape” worthiness, reflecting what was removed.
The 158 Main St. structure was also razed. The property owner promised a design similar to the barn, but the new place will not be a replica.