Posted on June 4, 2015 by donbayley/Webmaster 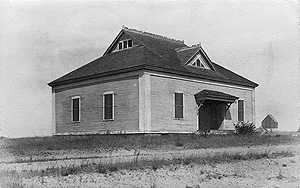 Manley told the crowd of about 20 people who came that “Preservation is what we do.” And, he’s correct. Their firm helped to transform Sandwich Town Hall. That job was funded through the Community Preservation Act. These could also be–but the big white elephant is the Wing School. That is going to need an enormous rehab, and it is centrally-located with lots of parking.

But, Manley first spoke of the Clark-Haddad property(formerly the Sand Hill School and Jarvisville School, among many other uses.) This 1961 square foot building could be transformed into meeting space for 100, and a wonderful venue for small events for about $1.1 million dollars. It was originally a two room school built in 1885 (each room was gender separated.) It was updated in 1935 and the 1980’s. Manley said the condition wasn’t bad. It has some deteriorating clapboard and wood trim, some rot around the windows, and asbestos tiles in the boiler room. Manley said the inside featured hardwood floors, and a dry basement. It could be an ideal gallery or meeting space. Kalsow said the high costs of rehab were delineated by the “prevailing wage” laws that govern towns, and make them paying the highest prevailing union wages. He said, “It’s not an efficient way of restoring, but it’s the rule cities and towns must follow in Massachusetts.”

The 1.1. million dollar quote included new electrical, mechanical and plumbing systems. The place would have a capacity of 100 people, but would be somewhat limited by the 29 parking spaces that would be allowed. Former Selectman Tom Keyes said the town needed function space and that the Clark-Haddad building could be “like the Grange in East Sandwich. We could give it to a group and let the community build something. 1.1 million seems like an awful lot of taxpayer funds.”

Joanne Westerhouse, who sits on the Committee that studied the re-use of the building, and is also president of the Sandwich Arts Alliance, sees it as a nice meeting space. “They could cater events there. The town could make money renting it out for things like coffee houses.”

The Deacon Eldred House dates back to at least 1756. It is much smaller, being only 908 square feet. It also has ZERO parking. But, it’s right downtown on the pond, and is an easy walk from the tourist-laden Grist Mill and Hoxie House (both currently run by the recreation department.). Because of its proximity to the pond, conventional septic systems are out. The Massachusetts Historical Commission controls its renovation. The windows and much of the outside wood will need replacement. Some newer boards are already rotted. The roof and the chimney were recently replaced and repaired.

The inside is beautiful. There are hardwood floors throughout. It has a nice 18th century feel. The inside looks wonderful, with good quality restoration work. A less renovated portion of the second floor would need rehab. The basement is wet, with a sump pump and mud floor. The second floor would need to be closed off to the public, to prevent the need for a costly elevator. If it were to be renovated as a “house museum”, Kalsow estimated the cost at $740,864. If it were renovated for offices or business use, the cost would be $877,383.

Tom Keyes also spoke up about this property. Keyes, who lives in a historic Sandwich home, said that the 1756 date of the property could have actually been an addition. “We shouldn’t touch this. We could have a real gem in our downtown. We need to learn about it.” This might make a good location for the Sandwich Historical Society and Commission. It was also suggested that someone could be hired to run the Eldred House, Hoxie House and Grist Mill (to help obtain grants for all three.)