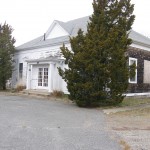 In 1851 a new 2 bay by 3 bay, 2-story, wood-frame building with a gable roof was erected at the corner of Factory Street and George’s Rock Road (16 Dewey Avenue). Known as the Jarvesville School, and later, the Sand Hill School, the building was replaced in 1885 with the current structure. It was built with a dividing wall down the middle and two entrance doors (gender-separated entrances were the custom at the time). After the school was closed, the b 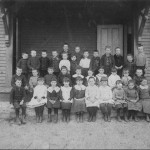 uilding served as an American Legion Hall (starting in 1931) and as a gathering place for children and seniors. In 1950 the structure was re-named the Clark-Haddad Memorial Building for the first two Sandwich residents to die in military service during World War I: Alden 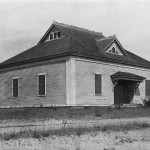 Clark and Michael Haddad. The American Legion Post 188 moved to new quarters in 1972. Later, 16 Dewey Avenue was used as office space by the Sandwich Public Schools until 2007.
The building stands empty today and the Historical Commission wants to see this wonderful landmark returned to use while preserving its historic character. Come view the interior, attend the Forum and share your thoughts.