When it comes to preserving parts of the past in general — and the old 1927 section of the Wing School off Water Street in particular — the Sandwich Historical Commission thinks it is better to be pro-active than re-active.

When it comes to what will happen to – and with – the Wing School complex and its playing fields, the commission has expressed disenchantment with how unfolding re-use studies are proceeding. In this instance, members say, a pro-active stance is much more difficult than a re-active one. 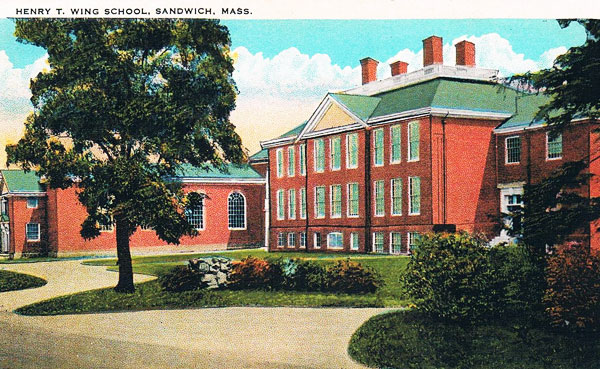 The commission has been rebuffed in its efforts to secure a seat on the Wing re-use committee working with Kaestle Boos Architects to determine Wing’s fate and future, which is being closely watched in the community.

Member Lisa Hassler says commission members have been told by town officials and selectmen that they merely have to “show up at the public meetings” and participate. The panel as such has followed that course and members have not yet devised an official Wing re-use position.

There is commission sentiment, however, that the red-brick exterior of the former Sandwich High School should indeed be preserved. Hassler said this part of the Wing school is significant to Sandwich’s past and is located in an historic area.

Everything related to Wing now centers on feasibility, planning and, to a lesser extent, cost.

Commission members on May 6 said they were somewhat surprised by the news that architectural Wing review to date has found “nothing unique about the building.” Member Carolyn Crowell said the old school was built in “a faux-colonial style and that there is not that much architecture like that around town, if any.”

The distinctive 1927 Wing section is on the National Register of Historic Places, and members say it still is an integral part of the gateway to Sandwich center. The original roof was slate and it included a widow’s walk, long-since removed during repair projects, Crowell said.

Commission member Bill Daley said he attended the first Wing-re-use public meetings and expressed his personal view that the town should also “consider moving some baseball diamonds used only in warm weather.”

This, Daley said, would allow for a sale of the Wing playing fields that could help underwrite any work deemed worthy of unfolding with the buildings.

The school department, meanwhile, plans to depart the Wing complex at the end of the scholastic year in June, agreeing to place funds in the system budget – under a memorandum of understanding with Town Hall – to provide for the school’s security.

Sandwich Schools Supt. C. Richard Canfield in recent months said that – community fondness and historical arguments aside – Wing operating systems are tired and aging and need monitoring, even while the building is closed.

Selectman Patrick Ellis serves on the committee riding herd on Wing re-use studies and the professional review of the building’s basic suitability for a new life.

Ellis last month said it is amazing that “there are numerous levels of flooring” throughout the Wing complex, something that evolved as new sections over the decades were added to the 1927 structure.