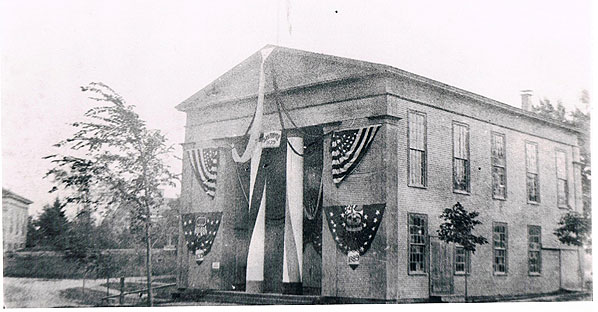 Town Hall all decked out for the “Quarter Millennial Celebration,”
September 3, 1889.

1889: The two hundred and fiftieth anniversary of what is termed the incorporation of the towns of Sandwich and Yarmouth was fitly commemorated. September 3, 1639, being the date when those two towns were recognized as such, by being represented in the first colonial representative assembly, was taken as that of their corporate existence.

Sandwich…celebrated the occasion on a scale commensurate with its importance. Bourne, being a portion of the original Sandwich, as Dennis was of Yarmouth, participated in the observances. The decorations of the town were elaborate and tasteful and the procession, under the marshalship of Mr. Wm. A. Nye, paraded through the principal streets of the town.

The exercises were held in the Casino [on School Street, now gone]. Hon. Charles Dillingham presided and made a speech of welcome, and afterwards introduced Rev N.H. Chamberlain, who was the orator of the day.

A dinner was served in a mammoth tent, after which, under the auspices of Toastmaster Frank H Pope, sentiments appropriate to the occasion were responded to by ex-Gov. John D Long, Gen John L. Swift, Hon. Charles S. Randall, Col Myron P. Walker, Mr. Charles E. Pope. An ode, written by Mr. Daniel F. Chessman, was sung to the tune of “America.”

In the evening there were fireworks, a ball, and a Venetian boat carnival. It was a matter of regret that the three towns of the county dating their origin on the same year could not have had a union festival, but it was a natural feeling with each to wish to observe this natal day on its own hearthstone, and amid accustomed scenes and surroundings.”

(from Cape Cod, the Right Arm of Massachusetts: An Historical Narrative by Charles Francis Swift)

A Memorial Volume was prepared for the 250th Anniversary.