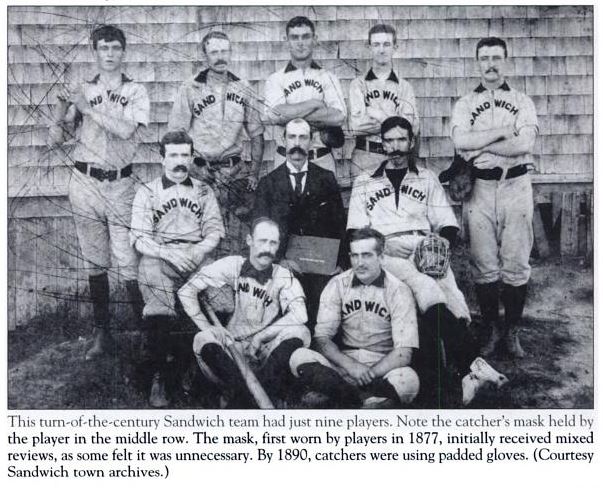 The Cape Cod Baseball League is recognized as the country’s most prestigious amateur baseball league. The rosters of all ten teams are stocked with the top college players from programs across the nation, many of whom are top MLB prospects and attract professional scouts.2

The history of the Cape League officially dates back to 1923, but the origins of baseball on Cape Cod extend back to 1865. The Nichols Base Ball Club of Sandwich was the first 9-man baseball team on Cape Cod. The Sandwich Independent reported a “base ball” game was played on School Street in November, 1865. The Nichols Club was officially formed in June of 1866. The club was named after Captain Edward Nichols, a retired sea captain. None of the farmers in Sandwich would rent a field to the team. Captain Nichols stepped forward and said the team was welcome to use his lot on School Street without charge. In return, the club was named in his honor.4 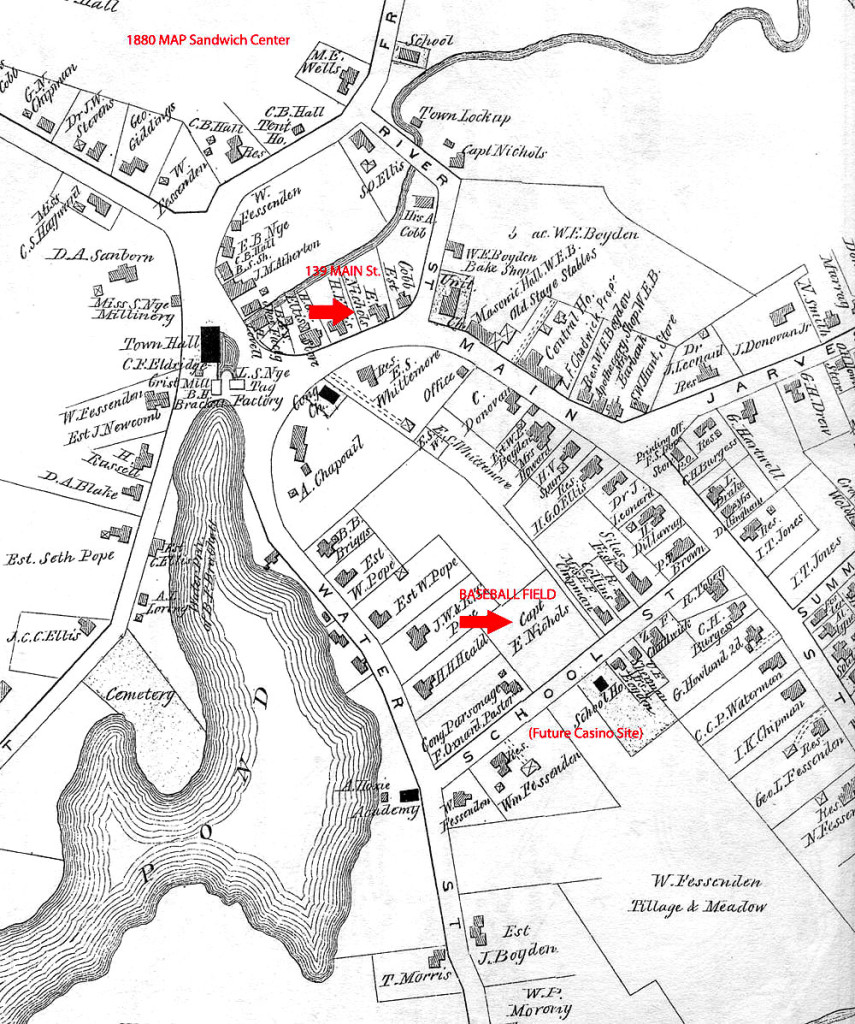 1880 Map of Sandwich showing location of the Nichols base ball field and Cpt. Nichols’ house at 139 Main St. (Click for Larger View)

Captain Edward Nichols was born in 1813 at Nantucket. He was for thirty-seven years engaged in the whale fishing, and master of a vessel for sixteen years prior to 1864, when he retired. He lived at 139 Main Street and owned the field on School street as well. 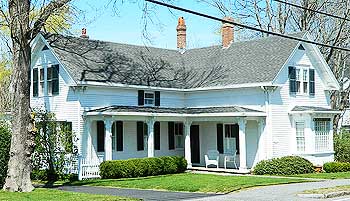 A newspaper report describes a game in Sandwich on August 13, 1867, between the Nichols Club and the visiting Cummaquid team. “For some years it was a wide-
awake institution,” reported one newspaper. 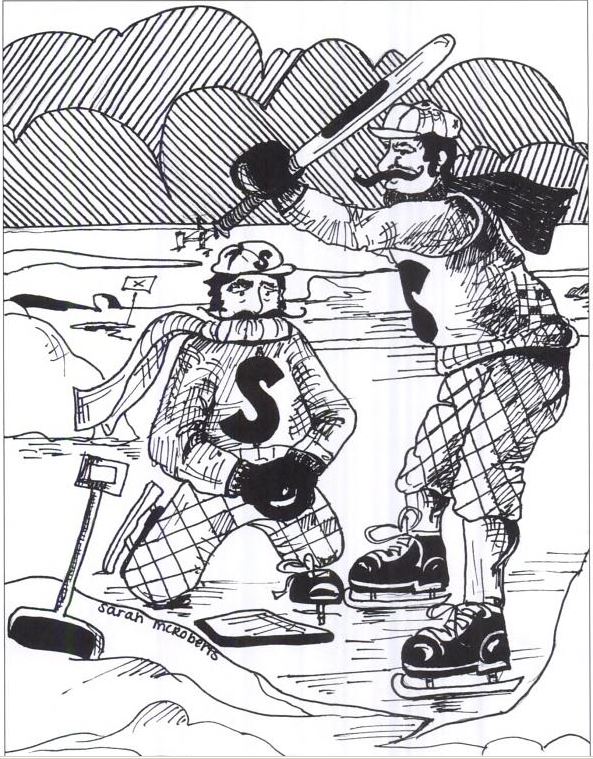 Today it seems odd to play baseball in November. In the early days it was not. On Election Day, November 7, 1867, for example, according to the Barnstable Patriot, the Cummaquids of Barnstable beat the Masketuketts of West Barnstable. As a matter of fact, in the 1870s, Sandwich’s “Star and Active” team played baseball on the ice of Mill Pond, every player on skates.

In Cape Cod League a Talent Showcase, James H. Ellis writes: “Appearance of baseball at this time was related to the Civil War. The game was popularized in the Army camps of 1861-65. Returning veterans spread the comparatively new game throughout the country. For a period, baseball was something of a spectacle. One veteran commenting in 1867 in the Barnstable Patriot said he liked the game even though the pitcher “sent `em in hot,” adding, “Hot balls in time of war are good. But I don’t like `em too hot for fun.” Another local commentator of the period thought, “It is the most radical play I know of, this base ball. Sawing cord wood is moonlight rambles beside base ball.” Nonetheless, baseball fever was raging on the Cape.” 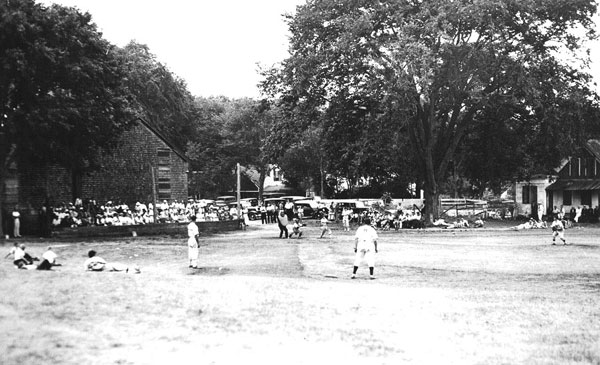 Baseball game at Casino Field. The back of the Casino is on the left; School St. School on the right. (Courtesy Sandwich Town Archives)

In 1884 a casino was built on School Street next to the school (yes, there actually was a school on School St.) This was across the street from the Nichols lot (see above map). Not a gambling casino like we think of today but rather a function hall, a place for community gatherings. Baseball games were played behind the Casino.

Some suggest that the Cape Cod Baseball League originated in 1885 (rather than 1923). “What seems to have happened is that an 1885 poster in the National Baseball Museum in Cooperstown came to light. The poster advertised a July Fourth game between Barnstable and Sandwich. From this early but incomplete evidence, it somehow seemed reasonable to trace the league’s traditions to that point. But the 1885 game, by contemporary news accounts, was at least the twelfth annual Fourth of July contest for the Barnstable squad.”4 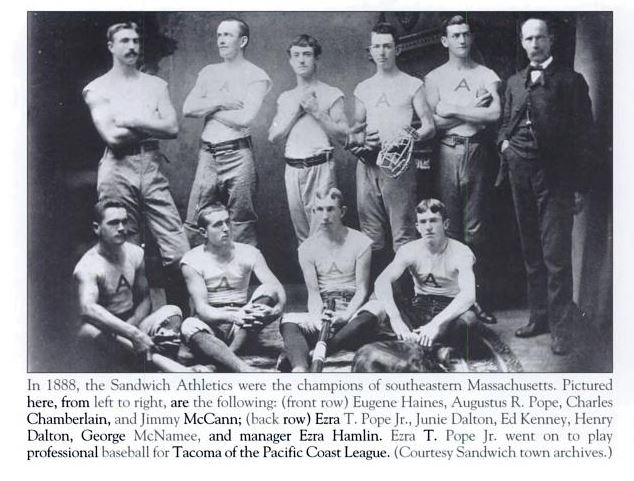 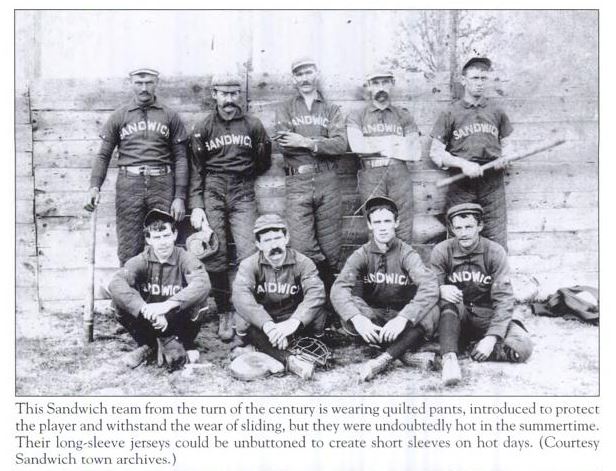 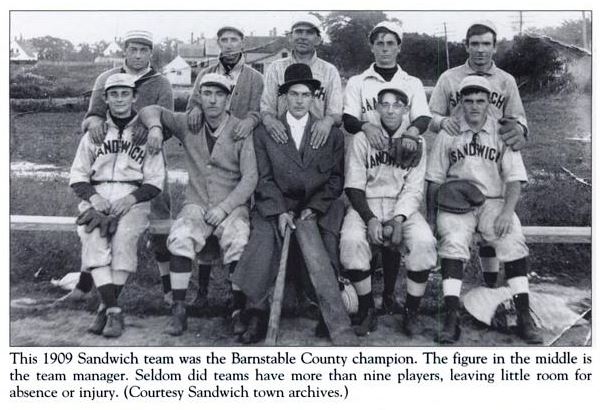 “The Cape League” was formed in 1923. The league consisted primarily of four teams from Falmouth, Hyannis, Osterville, and Chatham. But teams were also forming in other towns.

The Barnstable Patriot reported in 1923 that “Sandwich picked up the 5-4 win in a finely played game that featured a young man named Morrow pitching his very best, and having good support in the outfield.”5

In Baseball By the Beach Christopher Price writes: “A July 23rd note in the Patriot under the Sandwich section said the following: ‘What would baseball players do without the support of the fans? What care they, if a lady hustled the length of Main street in her kitchen apron, so anxious she was to get to the ball field and root.”” 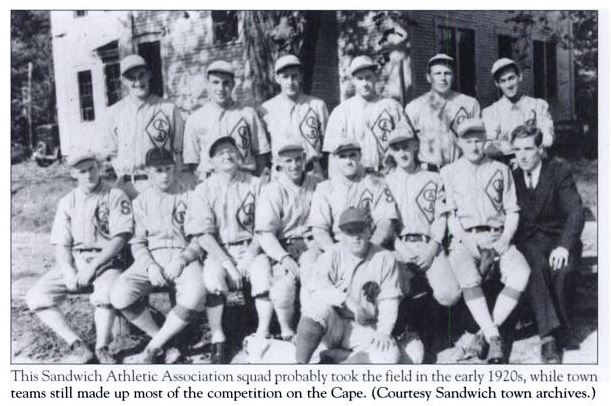 The Cape League varied during its first two decades. Towns were in one year and out the next. It was expensive to run a team. In addition to the original four, entries from Barnstable village, Bourne, Chatham-Harwich, Harwich, Orleans, Provincetown and Wareham participated. Teams did not limit themselves to league play, however. City clubs commonly were engaged. In 1929 Falmouth even took on the Boston Braves, losing an 8-7 exhibition. The Enterprise earlier had commented, “The caliber of ball in the league is being recognized by all the Boston experts as about as good as can be found outside the Big Show.”

In 1946, the league was split into the Upper and Lower Cape divisions. The Massachusetts Maritime Academy, Otis Air Force Base and the Cape Verdean Club also entered teams.

In 1949 Sandwich was faced with a dilemma. Author Christopher Price explains: “Only six young men were interested in playing on the town team. Shortly after, Sandwich ceased to field a baseball team at the highest level of competition on Cape Cod, and several of the players joined the fledgling Cotuit franchise” (today known as the Cotuit Kettleers).

In the 1990s the Cape Cod Baseball League discussed expanding from 8 to 10 teams. Sandwich’s historical advantage was considered a good reason for the town with the Cape’s first official team to form a new team and re-enter the League at this time. There were five candidates in all: Bourne, Brewster, Plymouth, Mashpee and Sandwich. A heated discussion took place and finally by a 31-2 vote, the League approved Bourne and Brewster as the newest members.5

Over time, the Cape Cod Baseball League has grown into the most elite and well-known college summer league in America.4

On July 12, 2004 a Cape League game between Hyannis and Wareham was played in Sandwich. According to an article on the CCBL website this game “didn’t just represent a routine weeknight contest between two West Division clubs. It represented an effort to bring the league back to its heritage and to include Sandwich baseball fans in the best family entertainment on the Cape. ‘It’s wonderful to bring baseball back to Sandwich, particularly with the recent discovery that the Cape League’s roots might go back to 1865 (in Sandwich) – we already know they definitely go back to 1885,’ said league president Judy Walden Scarafile. ‘This has been a hotbed of baseball for a long time.'”

On June 14, 2014, as part of Sandwich’s 375th anniversary celebration, a Cape Cod Baseball League game between the Bourne Braves and the Falmouth Commodores was played at Fenton Field in Sandwich, yet another tribute to the town where Cape Cod Baseball began!