In 1749, Reverend Abraham Williams became pastor at the First Parish Meeting House, bringing with him a 19-year old black slave named Titus Winchester. There are two versions of the “Titus” legend. One is that Rev. Williams offered his slave freedom but Titus preferred to wait until his master’s death before becoming free. Another version has it that in his Last Will & Testament Rev. Williams freed Winchester in recognition of his many years of faithful service as church caretaker. 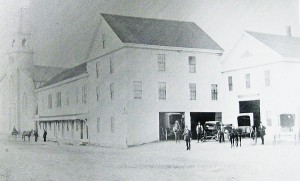 After Reverend Williams died in 1784 Winchester went to sea as a steward and, when Titus died in 1808, he left his entire estate (approximately $3,300) for the purpose of purchasing a two-faced clock for the Meeting House “so that it would ring for many years to come in memory of his former master.” His executor, William Fessenden, had the new clock installed, requiring the raising of the tower and spire. The clock faces were south (toward Main Street) and west (toward River Street). The clock came to be known as “Old Titus” to the people of Sandwich.
Winchester was so respected by the Sandwich townspeople, that he was interred in The Old Town Burying Ground in a tomb very near Rev. Williams that has the longest inscription of any of the gravestones (it refers to him as a “servant” rather than a slave). (Incidentally, The Old Town Burying Ground, which dates from the 1660s is fascinating to visit; the tombstone art and inscriptions speak volumes about the people and the times in which they lived.) 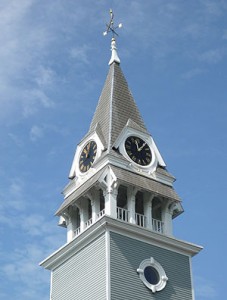 This photo is NOT the Titus Clock. In Sandwich, A Cape Cod Town, R.A. Lovell Jr. writes: “One memorable Sunday night in 1873 some control snapped and the clock struck off 406 bongs of the big bell before running down. A new works was clearly needed, and the town’s benefactor Jonathan Bourne of New Bedford stepped in with an offer of a new four-faced clock. A larger spire was constructed and the clock installed in 1880.” The Clock and Bell Tower have recently been restored by current owner Christopher Wilson. (The old church, which was used for a Doll Museum a few years ago, is now a private residence.)