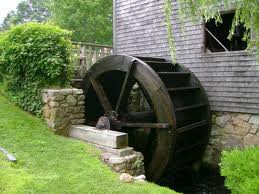 Sandwich Assistant Town Manager Douglas Lapp says it has become imperative to replace the wheel at the historic Dexter Grist Mill downtown next to Town Hall.

Lapp said the work is needed to avoid the mill being shut down for a prolonged period should the wheel fail.

“The wheel won’t last,” he said. “We need to do this replacement as soon as possible.”

“We don’t want it to fail and go off-line for a period,” Lapp said. “The wheel can’t be repaired any longer.”

The grist mill in the heart of the village may be the most photographed historic element in the area, situated between Town Hall and Shawme Pond along the mill stream, whose wall was reconstructed earlier this year as part of the Phase II pedestrian-plaza and bubbler project at Town Hall.