The Sandwich Historical Commission takes issue with sentiment expressed by some selectmen that the 1927 section of the Henry T. Wing School might not be worth preserving and instead probably should be torn down.

Commission members July 6 reiterated their support for selectmen opting to — at the very least — sell the old Sandwich High School to a suitable developer, who would preserve the distinctive redbrick exterior at Water Street. 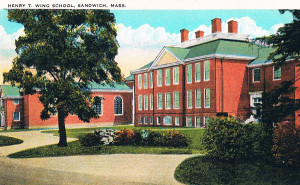 (from the Postcard Collection at the Sandwich Town Archives)

Commission member William Daley, after learning about some selectmen’s views, sent a message to the Wing Family of America group asking for moral support in any upcoming effort to save Wing.

Daley contests some sentiment by selectmen that the old high school might not be duly delineated as “historical.”

“Just the exterior is what we’re interested in and whatever a developer may want to do in there,” Daley said.

Commission chairman Gregory Anderson said the overall “what to do with Wing” issue is “sexy. It’s what everyone’s talking about. I think we should be able to put some effort into something we feel very strongly about.

“It would be a shame if all of this is simply rolled up into a demolition party,” Anderson said.

Commission members also remain disenchanted by a Town Hall decision last year to leave them out of a Wing-review effort in the first place and by the point that they were rebuffed shortly afterward when they sought to be added to the group considering options.

“But we can work to keep this key issue front and center,” Anderson said. “It’s the best we can do right now.”

Daley said it might serve the commission well for members to meet — perhaps informally — with the Sandwich Historic District Committee, the group that reviews all Old Kings Highway issues affecting property south of Route 6.

Commission members agree with the point that most residents don’t understand the distinctly separate roles of the two groups. The commission role on historical matters is advisory and one of advocacy. The district panel’s role is review and enforcement.

Daley said he doubts the district committee would ever approve a certificate of demolition for the 1927 Wing section. He said it makes some sense to discuss the Wing fate and future and the apparent willingness of some selectmen “to knock this building down.”

Selectmen, meanwhile, are considering myriad Wing options, including total complex demolition in favor of creating open space and playing fields. No decisions have been reached.

Selectmen Chairman Susan James, in this regard, promises much more community discussion about Wing even as school district administrative offices remain in the building for another scholastic year.